The Founder of Aikido 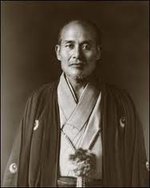 Morihei Ueshiba was born in 1883 in Tanabe, Japan. His father was descended from a samurai clan and renowned for his superior sakaku takeda.1 amartial arts techniques. Ueshiba’s mother was distantly related to the Takeda- clan, who for generations had been the masters and teachers of the Daito Ryu Jujutsu system. Training within this system was exclusively for the samurai elite. Sakaku Takeda, the head of the clan, started teaching people outside this elite at the end of the 19th century. 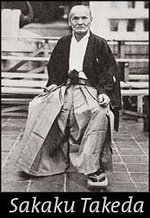 He started learning Tenjin Jujutsu and Yagyu Ryu Jujutsu, and later also Daito Ryu Jujutsu – the style that has had the greatest influence on the development of aikido. In 1922 Ueshiba was given a “kyoju dairi”-certificate, which granted him the official status of a Daito Ryu Jujutsu instructor. In his first dojo in the town of Ayabe, Ueshiba mainly taught members of the Omote religion.

Aikido and the Omote Religion

Morihei Ueshiba, who had a strong connection to the Omote religion, argued that the contemporary martial arts lacked a philosophical and spiritual dimension. They were developed during times of war and strife and focused entirely on the technical fight and defeating the opponent.

Inspired by the Omote religion, Ueshiba’s assumption was that everything on the Earth is universal, thus being innately divine. That we are all unique and independent individuals while at the same time parts of a coherent consciousness.From this philosophy, Morihei Ueshiba developed a budo system which through perfect timing allows you to become part of the attack, so you may assume control thus neutralizing the contradiction inherent in the struggle.

This spiritual foundation of aikido can be experienced directly during the daily training.A significant element of the exercise is the physical contact with the attacker, which practices and strengthens the ability to remain unaffected by this attack, even as the attack is neutralized.

”It is through the perfect technique ofMorihei Ueshiba

the Aikido, that the universal laws of life 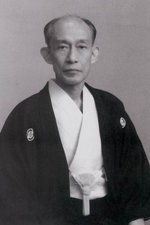 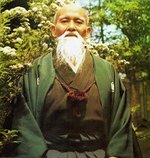 Aikido has passed through several stages as Ueshiba himself evolved – from the Daito Ryu-inspired techniques of the 1930’s to the aikido we know today. In 1927 Ueshiba founded Hombu Dojo (the headquarters) in Tokyo, but during the Second World War he moved to the village Iwama, north of Tokyo. Here he synthesized his life’s training, both spiritually and technically, into the aikido practiced today. It was also in Iwama Dojo that Ueshiba perfected the basic techniques of aikido and regularly taught weapon techniques using bokken (wooden sword) and jo (wooden staff), which also form the foundation for the body techniques in aikido. During this phase of his life in Iwama, the founder also formulated the concept of Takemusu Aiki, that is, the spontaneous execution of infinite techniques in a manner completely appropriate to the specific circumstance.

In his absence, the master's son, Kisshomaru, took charge of the headquarters dojo at this time.

After the war, in 1948, the new Aiki Association was launched.

Following the war, the master had come to feel that the principles of Aikido were essentially international and should be offered freely to all as a way of filling the spiritual vacuum of the modem world. Accordingly, instructors were sent out to all parts of the globe and the special restrictions controlling the acceptance of pupils for the new martial art were removed. Since that time, Aikido has spread widely outside of Japan.